Lake Ontario map uses relief shading to highlight traditional topographic features like elevation contours, landforms, lakes, and rivers along with roads, rails, trails, and park boundaries. The base map shows key points of interest such as campsites, trailheads, and landmarks. Major settlements shown in the map include Toronto, Hamilton, etc. The map is available in high-quality print in your choice of orientation, size, and finishing material. You can also customize the map around your central location. If you have any questions, reach out to us over the phone (866) 525-2298 or write to us.

The map of Lake Ontario uses relief shading to highlight traditional topographic features like elevation contours, landforms, lakes, and rivers. The map exhibits beautiful cartography and covers nearby cottages, resorts and other points of interest. The base map shows key points of interest such as campsites, trailheads, and landmarks.

Some of the major settlements shown in the map include Toronto, Hamilton, etc. You can buy the map in high-quality print in a different orientation, size, and finishing material. We also have the option to customize this map around the location of your choice.

The Lake Ontario is surrounded by Ontario province on the north, west, and southwest; and by the state of New York on the south and east. It is the smallest and most easterly of the Great Lakes of North America. Most of Ontario's populous cities, including Toronto and Hamilton, are situated on the lake's northern or western shores. The primary inlet is the Niagara River from Lake Erie.

In 1615, Étienne Brûlé, a French scout, and Samuel de Champlain visited Lake Ontario. The Ontario region was held by the Iroquois Indians, allies of the British. But during the late 17th and early 18th centuries, a temporary peace allowed the French to build forts, including Fort-Frontenac (1673) near the lake. Later the war between the French and Indian led to British control, and the American Revolution hastened settlement, trade, and shipping in the region.


You can also view the other Great Lakes maps like Lake Michigan map, and Lake Superior map. 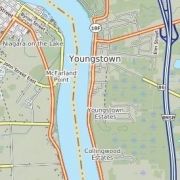 Niagara On The Lake Map
Price from $19.99
Add to Compare 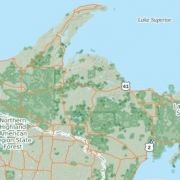 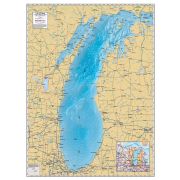 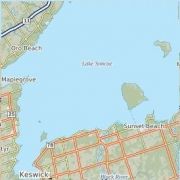