The Cambridge Ontario Postal Code map is available in high quality with clear boundaries that divide different postal codes. The map can be customized around the location of your choice that can be your business service area, sales territory, etc. Search for the location on the map and drag the arrows to define the print area. You can preview your map with all the details of the final print. The map is an ideal business tool for planning deliveries, catchment areas, etc. If you have any questions, reach out to us over the phone (866) 525-2298 or write to us.

Please wait while we get product images for customization.
If it takes longer than 50 seconds to load Please refresh the page.
Please wait, adding to your cart
Please wait, initializing the product
Add to Wish List Add to Compare
Email
Be the first to review this product
Details

The postal code map of Cambridge shows political boundaries, place names, highways, major parks and conservation areas, and points of interest. Use this for quick reference of infrastructures & other street details like interchanges, weigh stations and tolls. It is ideal for tracking down delivery service areas, sales territories, and catchment areas. Moreover, it also assists in providing up-to-date information & is suitable to create multiple maps from city to county scales or anywhere in between.

Cambridge city is located in the Southern Ontario, 55 miles (90 km) west-southwest of Toronto. In 1973, the amalgamation of Galt, Preston, Hespeler, the settlement of Blair and a small portion of surrounding townships led to the formation of Cambridge. The city is known for its high-technology industries as well as business and financial services.

Each administrative division in Canada maintains its own postal code for mail deliveries. These postcodes area a combination of letters and numbers that defines four different levels of a geographic unit. Every Postcode consists of two parts, the Outward Code (e.g. “SO15” 2GB) and the Inward Code (e.g. SO15 “2GB”). The two parts are separated by a single space. 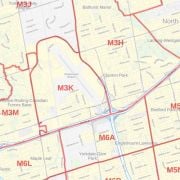