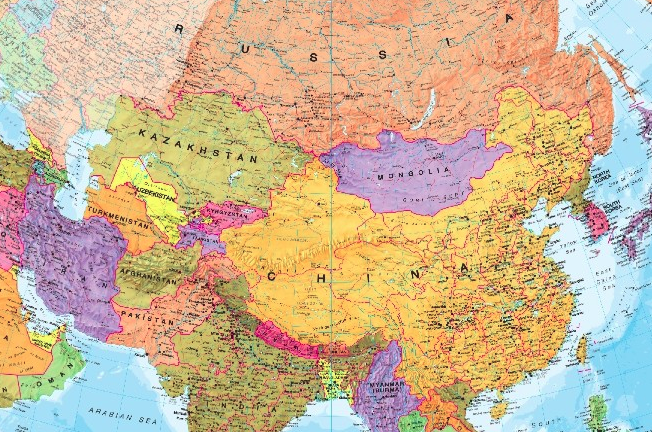 We feature a collection of high-quality maps of all Asian countries from publishers across the globe. These maps make a perfect gift for map lovers and Asian expatriates. You can get a map of China, Russia, India, Saudi Arabia, and all other Asian countries.

Whether you need a map for referential purpose in your office, educational use in classrooms, or for wall decor in homes, you can get one delivered to your doorstep.

The continent is further divided into 48 countries and broadly into five regions or subregions.

Central Asia stretches from the Caspian Sea in the west to China in the east and from Afghanistan in the south to Russia.

Maps of all the countries in Central Asia are listed below:

in the north. Major 5 countries in this region end with a suffix of “stan” and are informally referred to as “The Stans”.

Located just east of Central Asia, Southeast Asia is politically divided into eight countries and regions. It covers a total area of 4,571,092 square miles and has a population of approx 1.641 billion which makes it home to one-fifth of the total human population.

The location of the region on the Pacific Rim provides access for interaction with the global economy. Japan, South Korea, and Taiwan create an industrial environment that has awakened the human entrepreneurial spirit of the realm. The world’s major metropolises located here are Beijing, Hong Kong, Seoul, Shanghai, Taipei, and Tokyo.

Maps of all the countries in East Asia are listed below:

Southwest Asia comprises the sub-Himalayan SAARC countries and, for some authorities, adjoining countries to the west and east. It is topographically dominated by the Indian Plate, which rises above sea level as Nepal and northern parts of India.

The land of South Asia is bounded by the Indian Ocean on the south and by West Asia, Central Asia, East Asia, and Southeast Asia from west to east.

Maps of all the countries in South Asia are listed below:

Southeast Asia consists of the countries that are geographically south of China and Japan, east of India, west of Papua New Guinea, and north of Australia. The largest country here is Indonesia and it is also the largest archipelago in the world by size.

This region is bordered by East Asia to the north, South Asia and the Bay of Bengal to the west, Oceania and the Pacific Ocean to the east, Australia and the Indian Ocean to the south.

Maps of all the countries in Southeastern Asia are listed below:

Western Asia significantly overlaps with the Middle East, with the main difference being the exclusion of the majority of Egypt, which is counted as part of North Africa and of European Turkey and the inclusion of the Caucasus.

This region is located directly south of Eastern Europe. And is surrounded by seven major seas; the Aegean Sea, the Black Sea, the Caspian Sea, the Persian Gulf, the Arabian Sea, the Red Sea, and the Mediterranean Sea.

Maps of all major countries in Western Asia are listed below:

We have listed every Asian country here on the basis of their regions. You can view maps of all Asian countries by clicking on their names above. Every map you will see highlights the political and physical features of the country. You can use them for business and references in your homes and offices.

Get maps of all Asian countries delivered to your doorstep today!