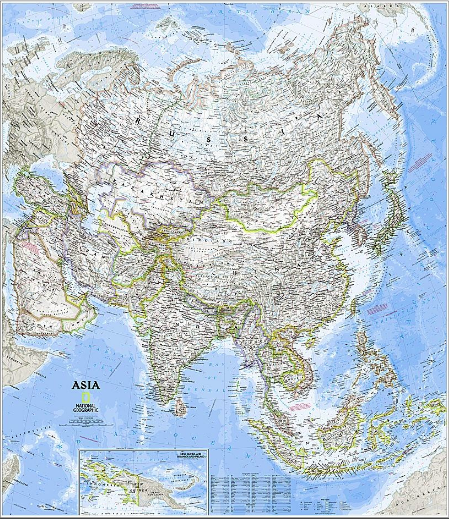 We all know about the gigantic size of Asia and the fact that it has given rise to many of the world’s first civilizations.

In fact, around 60% of the world’s current population belongs to Asia. Maybe that’s the reason why our maps of Asian countries’ are one of the bestselling maps, mostly bought by Asian expatriates.

But even after being so popular and populous, people get confused about what actually counts as Asia.

Can you make out the borders of Asia on this map?

This has always been a complex subject.

But hopefully, I will be able to explain the geographical limits of this huge continent through our maps.

Let’s start from the west.

Boundaries between these two continents only exist on paper. In reality, there is no significant physical distinction between them. Their boundaries are just merely a historical and cultural construct.

In some parts of the world, these two landmasses combined are known as Eurasia – the largest continent on Earth, comprising all of Europe  and Asia

The borders of these 2 continents were initially defined by European scholars and have changed over the years following various acts of imperialism. At one point a river called the Don River helped identify the boundary but the creation of the Russian Empire moved the boundary to the Ural Mountains around 1721.

The border that we know today is defined to follow the Aegean Sea, the Caspian Sea, the Turkish Strait, the Black Sea, the Greater Caucasus, and the Ural River and Mountains. It was defined in 1730 by Philip Johan Von Strahlenberg, an explorer and a Swedish Army officer.

Now moving towards the southwest we have Africa and Asia border.

The boundaries between Asia and Africa   are defined by the Red Sea, the Gulf of Suez, and the Suez Canal. This division has made the Sinai Peninsula geographically Asian, and Egypt a transcontinental country. Less than 2% of Egyptians live in the Sinai Peninsula and hence it is considered an African country.

Talking about the islands here, Seychelles, Mauritius, and Comoros in the Indian Ocean  are associated with Africa. Whereas the island of Socotra may be considered African as it lies on this continent’s shelf, but is part of Yemen, an Asian country.

A small gap between the two continents made up of the Bering Strait and the Bering Sea was a significant migration path for early man. Today, it’s the international boundary between Russia and the US.

This boundary separates the Diomede Islands located in the Bering Strait as Big Diomede (in Russia) and Little Diomede (in the US). Other islands like the Aleutian Islands are always associated with North America, except for the westernmost Near Islands group located in Asia’s continental shelf. If on rare occasions the Aleutian Islands are associated with Asia, it makes Alaska a transcontinental state.

Geographic region of Oceania includes Australasia, Melanesia, Micronesia, and Polynesia. The Malay Archipelago that lies between the mainland Indochina  and Australia is typically split between Asia and Australasia. Its western half is controlled by New Guinea which is a part of the Southeast Asian nation of Indonesia and the eastern half, Papua New Guinea, is considered part of Oceania.

I hope you enjoyed learning about the intricate boundaries of Asia. You can also view the borders of various Asian Countries through our maps. These maps are useful for references and can be used in homes, offices, and educational centers. You can get them delivered locally to your doorstep in a variety of finishing materials with MapTrove.