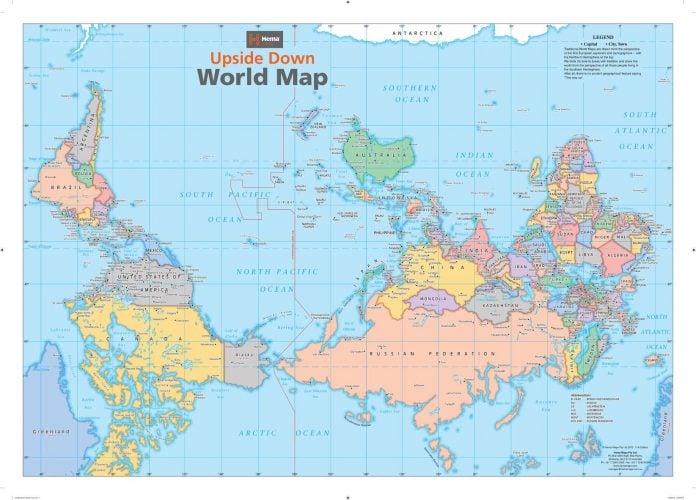 An upside down world wall map was launched by Australian Stuart McArthur on January 26, 1979. This map has everything reversed. Just as the name describes it, this map’s south point is at the top which also causes the west and east to switch sides.

Being a political style world map, it highlights the political features in different colors as per the international country boundaries. In addition to this, the map also features the significant roads, capital cities, approximate population size and elevated areas.

Through this world wall map, one realizes that the world is spherical rather than flat and this also gives a different picture of the world to the viewers. Primarily, this upside down version of the map is aimed at secondary school students but, it can make a great addition to a family room or office as well.  The design of the map uses soft and bright colors, which makes the map a very attractive display piece that brightens the decor of any room or space.

The idea of making the map upside down?

Upside down world wall maps show the world geography in a completely different perspective and also challenge our casual acceptance of European perspectives as global norms.  The McArthur map also makes us wonder why we are so quick to assume that Northern Europeans were the ones who invented the modern map — and decided which way to hold it — in the first place. But with this representation, one can certainly learn a great deal about looking at things differently. Merely by turning the map upside down and keeping all other aspects of the map unchanged, the viewer gets to see the world’s geography as if seeing it for the first time.