Nunavut’s emergence resulted in the first major change to Canada’s political map since the incorporation of the province of Newfoundland in 1949. The region has supported a continuous indigenous population for approximately 4,000 years. It separated from the Northwest Territories to become the newest Canadian territory.

Nunavut is the newest, largest, and northernmost territory of Canada. Creation of this territory resulted in the first major change to Canada’s political map since the incorporation of Newfoundland province in 1949. Its geography comprises a major portion of Northern Canada, and most of the Canadian Arctic Archipelago. The vast territory of Nunavut makes it the fifth-largest country subdivision in the world, and North America’s second-largest after Greenland.

Iqaluit is the capital city of Nunavut.

Under Mining and Exploration, there are three major mines operating in Nunavut: Agnico-Eagle Mines Ltd, second recently opened mine named Mary River Iron Ore operated by Baffinland Iron Mines, and the most recent mine to open is Doris North operated by TMAC Resource Ltd.

On April 1, 1999, Nunavut was created from the eastern part of the Northwest Territories and was officially named Canada’s third territory. On April 1, 2001, Nunavut reverted to three time-zones.

Most of Nunavut Canada uses the Eastern Time Zone and observes Daylight Saving Time. However, Central and Mountain Time Zones are used in several places in Nunavut.

Nunavut’s culture is an amalgam of indigenous music, media, film, performing arts, sports and alcohol. Music includes Inuit throat singing and drum-led dancing, along with country music, bluegrass, square dancing, the button accordion and the fiddle, an infusion of European influence. Besides, Nunavut is served by the Inuit Broadcasting Corporation, the Canadian Broadcasting Corporation, which is a radio and television production center in Iqaluit, and a bureau in Rankin Inlet.

Inuktitut is Nunavut’s dominant language and the territory remains very much alive through traditional arts such as soapstone carving, animation training workshops and many more. The Canadian territory has competed at the Arctic Winter Games and Hockey Nunavut competes in the Maritime-Hockey North Junior C Championship.

Nunavut has a highly regulated alcohol market. It is the last outpost of prohibition in Canada, and it is often easier to obtain firearms than alcohol. Historically, prohibition was shown to be highly ineffective as it was believed that these laws contribute to the territory’s widespread social ills.

Tourism in Nunavut focuses on outdoor activities and culture of the local Inuit, the indigenous people of Nunavut. Tourists enjoy watching wildlife as an attraction, and the territory is also home to a number of wildlife and bird sanctuaries. One can easily spot walrus, polar bears, a large variety of birds and belugas throughout Nunavut.

With a wide and lengthy river system, Nunavut offers canoeing and kayaking opportunities to suit experienced travelers. The territory has a vast expanse of uninhabited space that is ideal for activities like hiking and camping. Nunavut Tourism does not regularly publish tourism statistics, however, surveys reveal that people visited the Canadian territory during the period of June and October. One more tourism activity is unique to the Arctic North is iceberg watching. During the summers from April to July, people enjoy watching icebergs moving down rivers while the ice around melts.

Along with the Inuit language, sometimes called Inuktut, English and French are also official languages in the territory.

Flag of Nunavut features a red inuksuk—a traditional Inuit land marker—and a blue star, which represents the Niqirtsuituq, the North Star, and the leadership of elders in the community. The colors blue and yellow represent the riches of the land, sea and sky, while red is used to represent Canada as a whole. 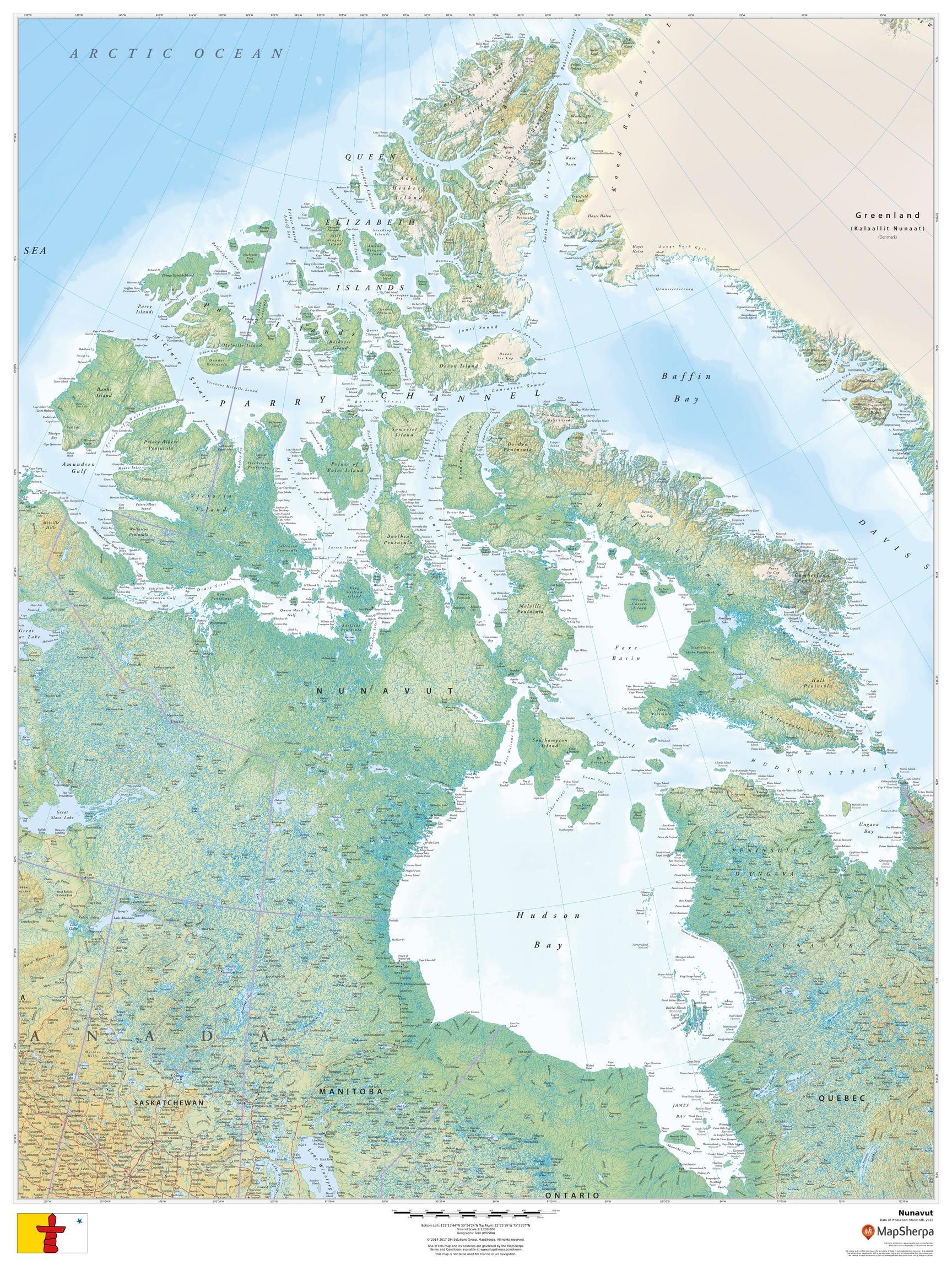