There are different geographical areas and five distinct regions of Canada. 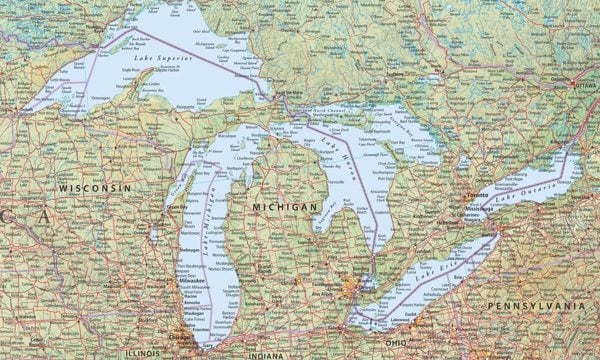 The population of the four Atlantic provinces was about 2.3 million. The provinces combined had an approximate GDP of $110.308 billion in 2011. The region is known for fishing, farming, forestry, and mining. Other than its natural coastal beauty, the area is also rich in history.

Central Canada is a region that consists of Canada’s two largest and most populous provinces: Ontario and Quebec. Geographically, they are not at the centre of the country but instead toward the east. Today, the term “Central Canada” is less often used than the names of the individual provinces.

More than half of the population of Canada lives in Ontario and Quebec. Around 18 million people live in cities and towns near the Great Lakes and the St. Lawrence River in Southern Quebec and Ontario. Known as the industrial and manufacturing heartland of Canada, the region is where the National Capital, Ottawa is located.

The Canadian Prairies is a region in Western Canada. Comprising of the Canadian portion of the Great Plains, and notably, the Prairie provinces comprise the provinces of Alberta, Saskatchewan, and Manitoba. The provinces are partially covered by prairie (grasslands), mostly in the southern regions of each province. These prairies are temperate grasslands and shrublands biome, within the prairie ecoregion of Canada.

This region comprises of one province, British Columbia on the Pacific Coast. The Canadian province is considered for its majestic mountains. It is also known as Canada’s Pacific gateway. With a demography of four million, the majority of people are found residing in Victoria or Vancouver. The region is also often referred to as the West.

The Northwest Territories is a federal territory of Canada covering a land area of approximately 1,144,000 km2 and a 2011 population of 41, 462, it is the second-largest and the most populous of the three territories in Northern Canada. The territories are bordered by Canada’s two other territories, Nunavut to the east and Yukon to the west, and by the provinces of British Columbia, Alberta, and Saskatchewan to the south.

The Cordillera region covers most of the western coast of Canada. It encompasses most of the areas within the Cordillera Central mountain range of Luzon, the largest range in the country. British Columbia and the Yukon Territory are the two provinces in the region. The word Cordillera is actually a Spanish word that means mountain regions.

The vast stretch of land between British Columbia and Ontario comprises an area known as the Canadian Prairies, a 2,000 km valley of plains, forests, and farmland. The resource-rich region has long served as the country’s breadbasket and a crucial lynchpin in the national economy.

In strict geographic terms, the North refers to the immense hinterland of Canada that lies beyond the narrow strip of the country where most Canadians live and work. The North generally refers to the Northwest Territories, the Yukon and Nunavut.

Also known as the Laurentian Plateau, the Canadian Shield is a large area of exposed Precambrian igneous and high-grade metamorphic rocks that forms the ancient geological core of the North American continent.

The Great Lakes are the largest group of freshwater lakes on Earth by total area, and second largest by total volume, containing 21% of the world’s surface fresh water by volume. The Great Lakes and the Great Lakes of North America, are a series of interconnected freshwater lakes located primarily in the upper mid-east region of North America, on the Canada-United States border, which connect to the Atlantic Ocean through the Saint Lawrence River. They consist of Lakes Superior, Michigan, Huron, Erie, and Ontario.

The large river in the middle latitudes of North America, The Saint Lawrence River flows in a roughly north-easterly direction, connecting the Great Lakes with the Atlantic Ocean and forming the primary drainage outflow of the Great Lakes Basin.

Atlantic Canada is a Canadian region that comprises the four provinces located on the Atlantic coast, excluding Quebec: the three Maritime provinces – New Brunswick, Prince Edward Island, and Nova Scotia – and the easternmost province of Newfoundland and Labrador.