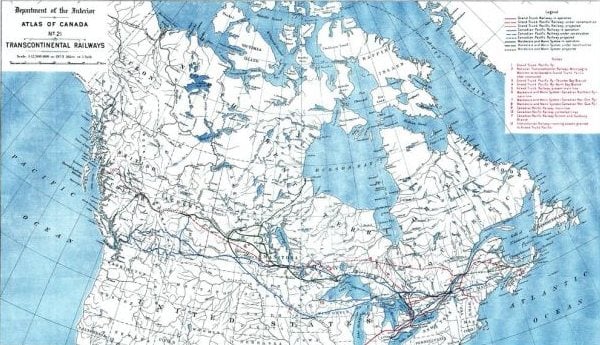 Air transportation constitutes 9% of the transport sector’s GDP generation in 2005. Canada’s largest air carrier and its flag carrier is Air Canada, which had 34 million customers in 2006 and, as of April 2010, operates 363 aircraft. CHC Helicopter, the largest commercial helicopter operator in the world, is second with 142 aircraft. Canada’s airline industry saw significant change following the signing of the US-Canada open skies agreement in 1995, when the marketplace became less regulated and more competitive.

Canada had a total of 72,212 km of freight and passenger railway, of which 31 km is electrified. The intercity passenger transportation by rail is now limited, freight transport by rail remains common. In 2006, the total revenues of rail services was $10.4 billion, of which only 2.8% was from passenger services.

Water transportation is generally used for movement of bulk commodities of relatively low value per tonne, such as coal, ore, grain, gravel and salt. The Port of Vancouver is the busiest port in Canada, moving 68 million tonnes or 15% of Canada’s total in domestic and international shipping in 2003.
Inland waterways comprise 3,000 km, including the St. Lawrence Seaway. Transport Canada enforces acts and regulations governing water transportation and safety.