Making of Canada, the North - Published 1997

Explore the northernmost reaches of Canada with this educational map of The North. Published in September 1997 as part of the "Making of Canada" series, this map is a companion to the map of the Yukon and Northwest Territories printed in the same issue. Particular attention is paid to the history of the region's first inhabitants and the formation of the new province of Nunavut.

This map is available in 27 x 20.5 in. Please select a finish of your choice
Please wait, adding to your cart
Please wait, initializing the product
Add to Compare 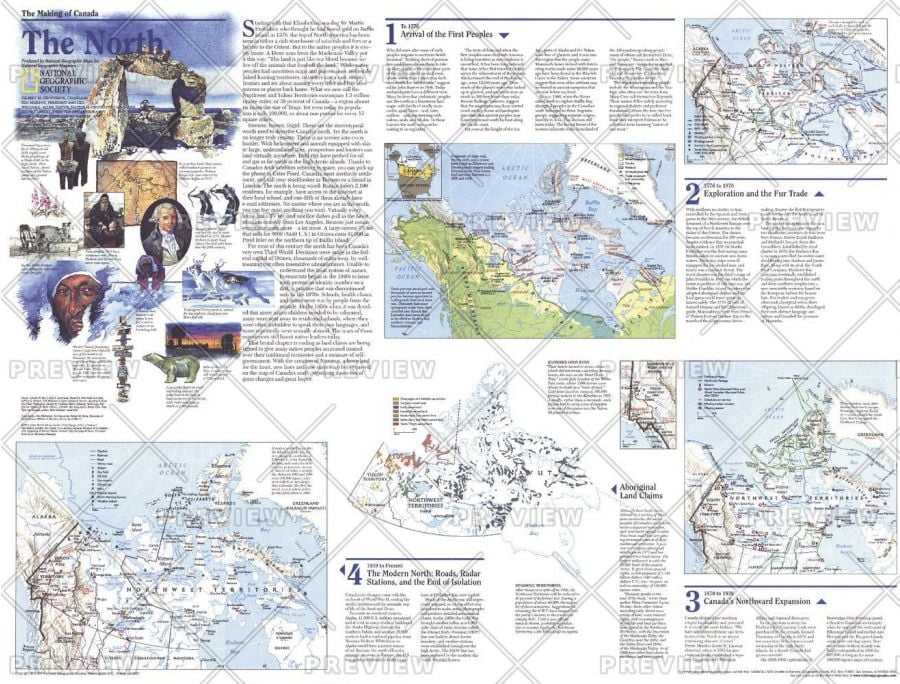 About the map: Making of Canada, the North - Published 1997

Explore the northernmost reaches of Canada with this educational map of The North. Published in September 1997 as part of the "Making of Canada" series, this map is a companion to the map of the Yukon and Northwest Territories printed in the same issue. Particular attention is paid to the history of the region's first inhabitants and the formation of the new province of Nunavut.

Features and stories highlighted on the map

To 1576: Arrival of the First Peoples

In Canada, the term Indigenous peoples refer to First Nations, Métis and Inuit peoples. These are the original inhabitants of the land that is now Canada. In 2016, over 1.6 million people in Canada identified as Indigenous, making up 4.9 per cent of the national population.

The Indigenous peoples have been in Canada since time immemorial. They have formed a complex, social, political, economic and cultural systems before Europeans came to North America. The story of and when the first peoples came to North America is being rewritten as new evidence is unearthed. It has long been believed that Asian tribes first travelled on foot across the subcontinent of Beringia to Alaska toward the end of the last ice age, some 12,000 years ago.

Exploration of Canada by Europeans began with the Norse in the late 10th century on the country’s East Coast. Following Jacques Cartier’s arrival in 1534, over the course of the next three centuries British and French explorers gradually moved further west. Commercial, resource-based interests often drove exploration; for example, a westward route to Asia and later, the fur trade. By the mid-19th century, most of the main geographical features of Canada had been mapped by European colonists. For nearly 250 years, from the early 17th to the mid-19th centuries, the fur trade was a vast commercial enterprise across the wild, forested expanse of what is now Canada.

Fur Trade began as an adjunct to the fishing industry. During the early 16th century, fishermen from northwest Europe were taking rich catches of cod on the Grand Banks off Newfoundland and in the Gulf of St. Lawrence. Drying their fish onshore took several weeks, during which time good relations had to be maintained with Indigenous people, who were eager to obtain metal and cloth goods from the Europeans. What they had to offer in exchange were furs and fresh meat. The fishermen found an eager market in Europe for the furs and made high profits.

Canada obtained its northern empire haphazardly and governed it in much the same fashion. In the previous century, the Hudson’s Bay Company lands were purchased by the later formed Dominion of Canada in 1870, and ten years later Britain transferred ownership of the high Arctic islands. In a decade, Canada had grown ninefold.

4. The Modern North: Roads, Radar Stations, and the End of Isolation:

Cataclysmic changes came with the outbreak of World War II, ending the North’s isolation and the nomadic way of life of the Inuit and Dene. To create an overland route to Alaska, 11,000 U.S military personnel and at least as many civilians bulldozed the Alaska Highway through the Alaska Highway through the southern Yukon, and another 25,000 workers built a road and pipeline from Norman Wells to Whitehorse so Alaska would have a secure source of oil. The North offered a strategic air route to Europe, the U.S. was given permission to build an airbase at Frobisher Bay, now Iqaluit. In the 1950s, the Cold War brought another influx as a 5,000 - mile chain of radar stations called the DEW line.

Though lands of the Aboriginals were claimed by a variety of European monarchs, the native peoples of Canada’s north were never conquered in warfare, and most never signed treaties. A process to recognize aboriginal title began in 1973 and has produced ten land claims. The largest settlement is with the 22,000 Inuit of the Eastern Arctic. 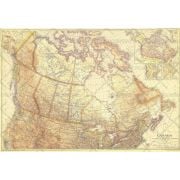 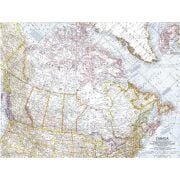 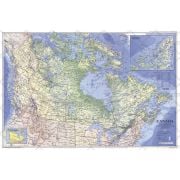 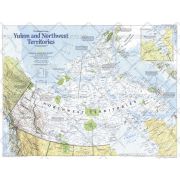 Making of Canada, Yukon and Northwest Territories - Published 1997
Price from $21.99
Add to Compare