Stoopendaal Map of the World in two Hemispheres (1730)

This map is available in 18 x 12.5 in. Please select a finish of your choice
Please wait, adding to your cart
Please wait, initializing the product
Add to Compare 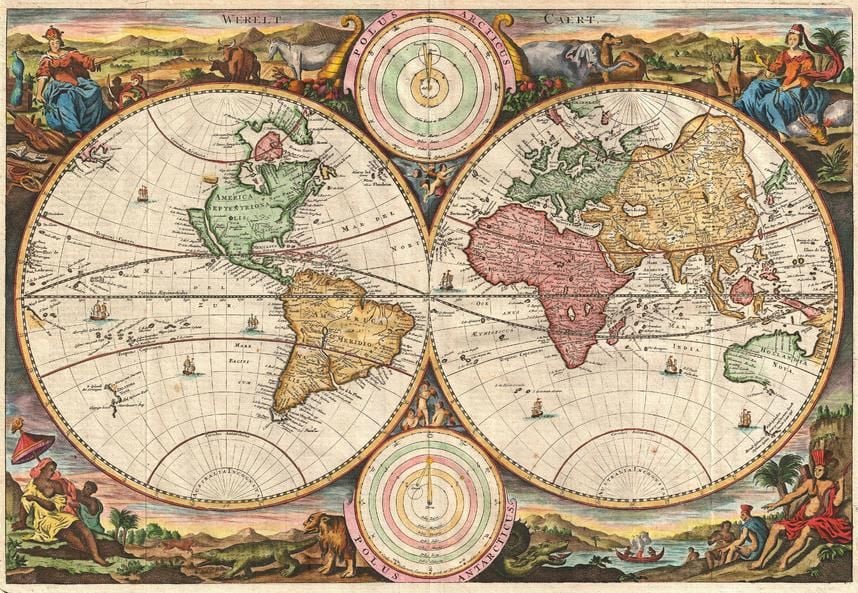 More about the old world map

The decorative cartouches in the four corners are representative of the Americas, Europe, Africa and Asia and feature the indigenous flora and fauna of those lands. Published by brothers Pieter and Jacob Keur, the Stoopendaal map is noted mainly for the brother’s contribution in the publication of Bibles and biblical maps.

Stoopendaal was probably trained to printmaker and draftsman by his father, Bastiaan Stopendael, who practised the same profession. Daniel Stopendaal was a Dutch illustrator, cartographer, and engraver, who made various engravings and etchings of maps and world maps. Based on Nicolas Visscher’s map of 1663, the map shows a dual-hemisphere outlook of the world. Also included are solar charts that are centred around the sun and the earth. The world map with hemispheres and countries also shows an allegorical representation of the continents. This cartouche work corresponds to that seen in the second world Bible map produced by Nicolas Visscher, though the map has changed to accommodate the evolving geographical suppositions.

Stoopendaal revisions of Visscher’s work include geographical updates as well as the incorporation of Copernican and Ptolemaic solar systems in the place of Visscher's polar projections - though curiously Visscher’s labels remain. Stoopendaal’s rendering of the Great Lakes as a single body of water open to the west is of particular interest and is the most ephemeral element of this map, being updated in subsequent editions to reflect ongoing European exploration of the region. The unusual rendering of the Great Lakes shown here is unique to Visscher’s work and appears in several of his maps. At first glance, Visscher’s great inland sea appears uncannily like Verazanno’s Sea, a 16th-century speculative body of water extending to the Pacific through the centre of North America, which was no doubt a direct influence on the water form established here.

This Artokoloro published world map showing hemispheres can be bought online at MapTrove. It is available in a variety of finishing options including paper, lamination, matte plastic, and matte plastic with rails. This is an artistic map exhibiting a dated outlook that can be used as:

Artokoloro is an independent map publishing company that sells material related to art, culture, history, nature, and travel domains. The publishing house is the parent company of Liszt Collection and offers print-on-demand services to map companies. 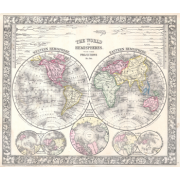 Mitchell Map of the World on Hemisphere Projection (1864)
Price from $25.99
Add to Compare 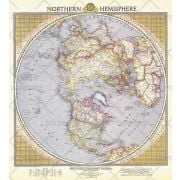 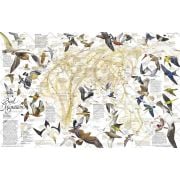