The United States Map with Capital is a graded series map, designed by National Geographic perfect as an educational tool. Its bright layout of the country invites curiosity and learning for grades 4-12. This political map clearly depicts the boundaries of all 50 States with colored contour and defined margins. Names of individual states and provincial capitals are printed in readable fonts and are easily identifiable.

This map is available in 51.75 x 40.75 inches. Please select a finish of your choice
Please wait, adding to your cart
Please wait, initializing the product
Add to Compare 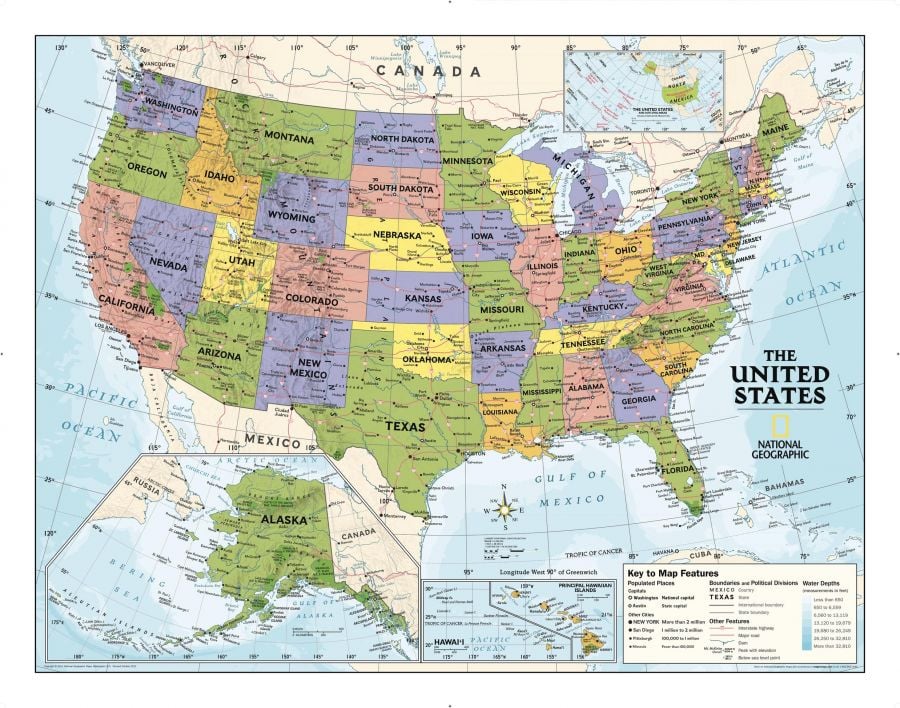 This map has been particularly designed for mapping lessons to address the unique needs of K-12 students, which will enrich their understanding of the country. The Political Map also differs from the vast variety of classroom poster map as it uses the Winkel triple projection, which minimizes all forms of geometric distortion.

The map layout shows the oceans and gulfs surrounding the country and includes an inset map of two other states- Alaska and Hawaii.

A key to the map elaborates information of the main data frame. A decorative compass rose is also added to the frame to indicate direction.

This graded series map is a colorful representation of the fourth largest country of the world designed to dresses up any wall informatively as well as aesthetically.

This Political Map of the United States makes a perfect classroom tool for grades 4-12. This graded-series of the map, designed by National Geographic makes attractive imagery of the country to encourage learning. Educators can use this map resourcefully for K-12 students to add context and relevance to topics relating to the country’s political description.

Locations on the Map

States are demarcated with black line margins and bright color palette in their true proportion. All 50 States are captioned with state names in big fonts. National and provincial Capitals are dotted, indicating their placement. Some major cities are also prominently visible.

The map is detailed with grid lines of latitudes and longitudes to define location. Each grid line is numbered with degrees. The Tropic of Cancer is also clearly marked on the map.

This Map of USA has three useful insets showing states of Alaska, Hawaii and the entire North American continent with USA as the highlight. Parts of Russia and Canada also form a part of the Alaskan inset along with Aleutian island. The Hawaii locator shows the principle Hawaiian Islands with grid location.

Important details like populated areas, international boundaries, political divisions and water depths are other features that form a part of the legend. The map has a decorative compass rose indicating cardinal directions

This Political Map differs from other classroom maps as it uses the Winkel Triple projection which minimizes all forms of geometric distortion and provides the best combination of size, shape and distance giving the map the best view.

A variety of other options are available for perusal, like 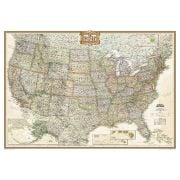 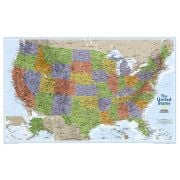 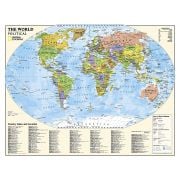 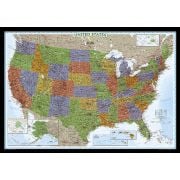 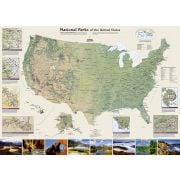 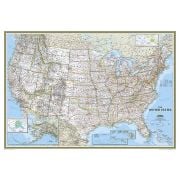 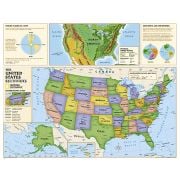 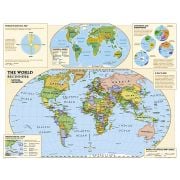 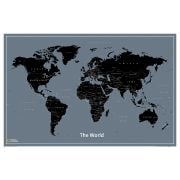 The World for Kids
Price from $21.99
Add to Compare