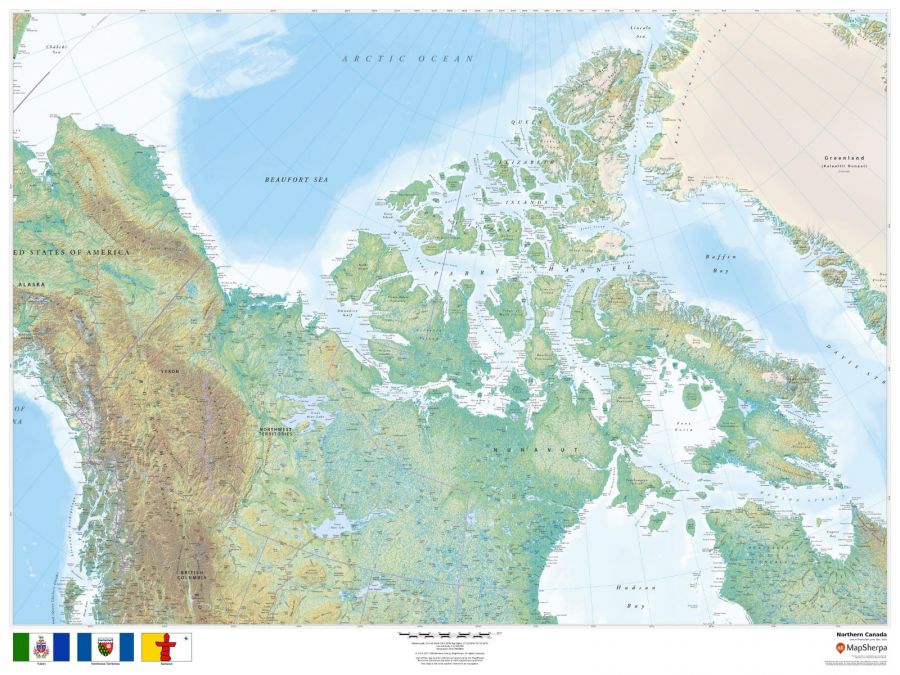 The MapSherpa product is a clear representation of the Northern Canada region. Updated with terrain information and relief details, the map covers the Canada territories showing Nunavut, Northwest Territories, British Columbia, Yukon and partially the region of the United States. This is a beautiful map that uses hues of green and brown to highlight land impressions and a panel below the map reveals the map symbols of the three territories.

About the Northern Region of Canada

Colloquially known as the North, Northern Canada is the vast northernmost region of Canada variously defined by geography and politics. Politically, the term refers to three territories of Canada: Yukon, Northwest Territories, and Nunavut. They extend into the Arctic and have just above 100,000 inhabitants spread across a land area than India.

The three territories that form the region:

Known as the most accessible of the three territories with the Alaska Highway providing road links to Alaska and British Columbia. It is the smallest and westernmost of Canada’s three federal territories (the other two are the Northwest Territories and Nunavut).

Previously the largest of all provinces and territories, parts of it have since split over the history of Canada, most recently Nunavut in 1999. It is a federal territory of Canada and the second-largest and the most populous of the three territories in Northern Canada.

Only split off from the Northwest Territories in 1999, this area has strong Inuit heritage. It is the newest, largest, and northernmost territory of Canada.

Much of the population are Inuit (Eskimo) or members of other native First Nations.

Recognized as a modern-day map distributor, MapSherpa brings in high-quality international map publisher content to market through secure print on demand technology. The publishing company is a digital company that has been working towards global map distribution since the past 20 years. With easy-to-access print on demand services and user-friendly digital mapping content, MapSherpa has gradually shifted focus into the map publishing and retail industry.