The wall map of North Central US is a perfect geographical guide depicting the physical and political layout of the region. According to the US Census Bureau, this sector encompasses 12 states which include Illinois, Indiana, Iowa, Kansas, Minnesota, Missouri, Michigan, Nebraska, Ohio, North Dakota, South Dakota, and Wisconsin.

State names, capitals, and major cities are type faced in their true location. State boundaries are demarcated, terrain features are depicted with preciseness, and the interlinking transportation routes of this sector are drawn out with clarity. Designed in a soft color palette, this wall poster makes a perfect frame and packages information with style. 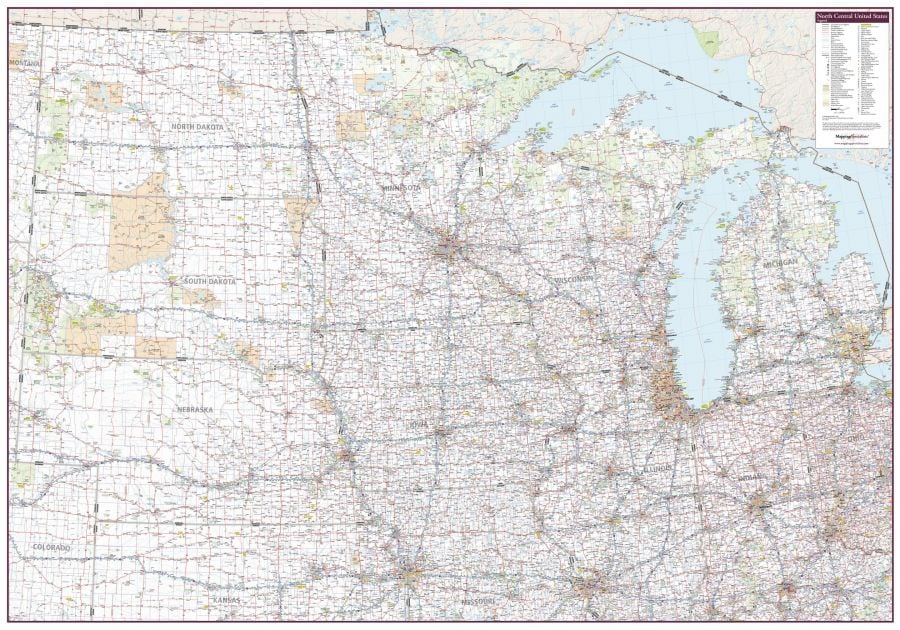 This Wall Map of North Central United States is a high-quality image of the region designed with accuracy using current map data. The extent of the map is elaborated with the physical and political placements of the 12 states that comprise this region.

The transportation network is elaborated with numbered highways, color-coded route charts and airport locations. An informative key table is added to the exhibit which helps understand symbolic representations in the title frame.

Iowa: The Hawkeye State of Iowa gets its name from the “Ioway” tribe of native Americans who once inhabited the state. It is divided into 99 counties. Des Moines is the state capital and also the most populous city. The Zip Code range of the state Iowa is from 50001-52809.

Kansas: The state of Kansas derives its name from the “Kaw Nation”, a group of Native American tribes. It is the 15th largest state in terms of area. The capital city is Topeka whereas the largest city, Wichita. The state is divided into 105 counties. The Zip codes in Kansas range from 66002-67954.

Minnesota: The State of Minnesota is the second northernmost state of the contiguous US and the 12th largest in terms of area. The Capital City is Saint Paul and Minneapolis is the largest city of the state. Minnesota is divided into 87 counties. The Range of Zip codes in Minnesota is from 55001-56763.

Missouri: The state is named after the Missouri River. Capital of Missouri is Jefferson City and the largest metro is Greater St Louis whereas Kansas is the largest urban settlement. Missouri has 114 Counties and one Independent City which is St Louis. There are 92 parks and historic sites in Missouri. The zip code range of the state is 63001-65899.

Nebraska: The name of the state is an anglicized pronunciation of Otoe word “Ni Brasge” meaning ‘flat river’. Lincoln is the capital of the state and the largest city is Omaha. Nebraska is divided into 93 counties. The Zip Code range of Nebraska is 68001-69367.

South Dakota: South Dakota is the fifth least densely populated state of the nation and the 17th largest state in terms of land area. Pierre is the state capital and Sioux Fall is the largest city. Dakota is divided into 66 counties and the range of Zip code is 57001-57799.

Illinois: The state capital Springfield was home to President Abraham Lincoln till he became president. Chicago is the most populous city in the state. It is the principal city of the Chicago metropolitan area which is also known as Chicagoland. Illinois is divided into 102 counties. Cook County is the largest county in terms of population. The Zip Code Range of the state is from 60001- 49971.

Wisconsin: Wisconsin is nicknamed “America’s Dairyland” as it is one of the leading producers of dairy products in the country. The Capital of the state is Madison and the largest city is Milwaukee. Wisconsin has been divided into 72 Counties. The Range of Zip codes in the state is from 53001-54990. 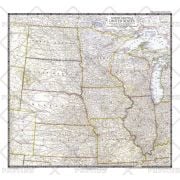 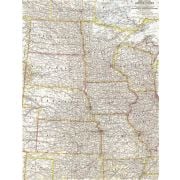 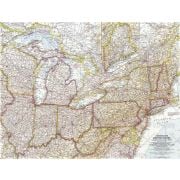