The geography of the world’s second-largest country is pretty much vast and diverse. Situated in northern North America, Canada spans over the entire territory of the North Pacific Ocean to the west and the North Atlantic Ocean to the east and the Arctic Ocean to the north, with the United States to the south and northwest. Greenland is to the northeast, off the southern coast of Newfoundland lies Saint-Pierre and Miquelon, an overseas collectivity of France. 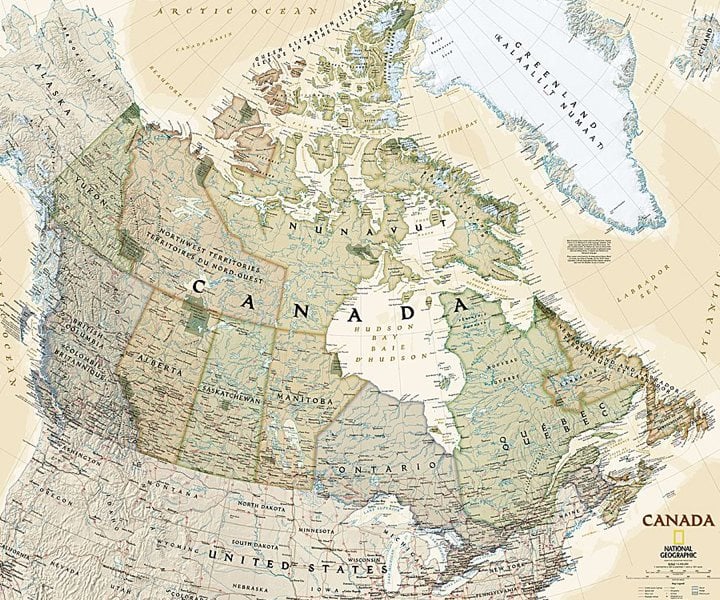 The country covers an area of 9,984,670 km2 which includes 9,093,507 km2 of land area and 891,163 km2 of freshwater. In terms of the total area, Canada is slightly less than Russia and slightly smaller than Europe. Canada ranks fourth in land area and is inhabited by a population of approximately 35,151,728 million.

The Appalachian Mountains also known as the Appalachians, are mountains in eastern North America. The term Appalachian refers to several different regions associated with the mountain range. These mountains originated roughly around 480 million years ago and almost reached elevations similar to those of the Alps and the Rocky Mountains before experiencing the natural erosion. Geographically, the range falls mostly in the United States but it extends into southeastern Canada. The Appalachian chain forms a series of alternating ridgelines and valleys oriented in opposition to most highways and railroads running east-west.

This sedimentary rich plain in the southern parts of Quebec and Ontario, within the Great Lakes and St. Lawrence basin, was home to large mixed forests covering a mostly flat area of land between the Appalachian Mountains and the Canadian Shield. Most of this forest has been cut down through agriculture and logging operations, but the remaining are heavily protected.

The Canadian Shield is a large area that is filled with deposits of Precambrian igneous and high-grade metamorphic rocks. Composed of igneous rock from its long volcanic history, the area is covered by a thin layer of soil. With a common joined bedrock region in eastern and stretches north from the Great Lakes to the Arctic Ocean, covering over half of Canada; it also extends south in the northern reaches of the United States.

The northeastern part of Alberta, northern parts of Saskatchewan, Manitoba, Ontario, and Quebec, as well as most of Labrador, are located on a vast rock base, the Canadian Shield.

The vast physiographic region spreads across the Laurentian craton of central North America. It extends from the Gulf Coast region to the Arctic Ocean along the east flank of the Rocky Mountains. Formed out of the collision and welding of cratons around 1.9 billion years ago. Precambrian metamorphic and igneous rocks now form the basement of the Interior Plains and make up the stable nucleus of North America. With the exception of the Black Hills of South Dakota, the entire region has low relief.

Western Canada is a land of many volcanoes and is also a part of the Pacific Ring of Fire, a system of Volcanoes found around the margins of the Pacific Ocean. More than 200 young volcanic centres stretch northward from the Cascade Range to Yukon. Moreover, there are five volcanic belts with different volcano types and tectonic settings. The Northern Cordilleran Volcanic Province, the Garibaldi Volcanic Belt, the Anahim Volcanic Belt, The Chilcotin Group,
and the Wrangell Volcanic Field was formed as a result of subduction of the Pacific Plate beneath the North American Plate at the easternmost end of the Aleutian Trench.

The Canadian Arctic Archipelago or the Arctic Archipelago is a group of 36,563 islands in the Arctic Sea, north of the Canadian mainland. The region covers an area of 1,424,500 km2 and is situated in the northern extremity of North America. The largest part of the Canadian Arctic is composed of seemingly endless permafrost and tundra north of the tree line, it encompasses geological regions of varying types: the Arctic Cordillera (with the British Empire Range and the United States Range on Ellesmere Island) contains the northernmost mountain system in the world.