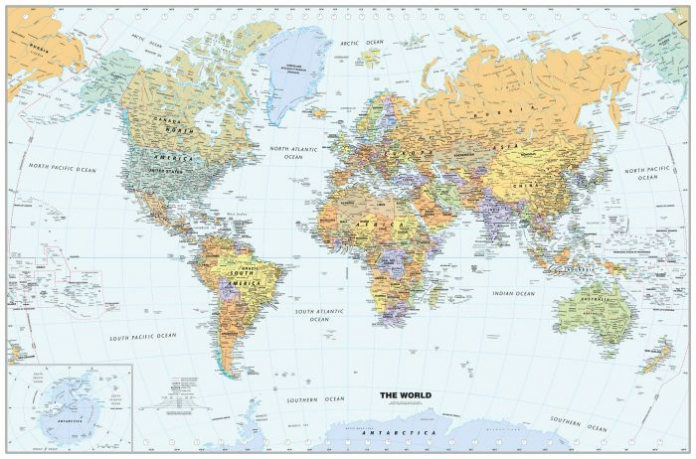 Different elements of a map play an important role in describing map details. Numbered here are descriptions of cartographic elements commonly found on map layouts. These essential features of a map are found on almost every map around us. They are- title, direction, legend(symbols), north areas, distance(scale), labels, grids and index, citation – which make it easier for people like us to understand the basic components of maps.

1. Title:
The title of a map is one of its vital features. It is the keyword that grabs the reader’s attention. A short ‘title’ might be apt if readers are familiar with the theme being presented. The need for a suitable title, whether small or long, depends on the reader but the title should provide an answer to their “What? Where? When?”

2. Direction: Direction is shown on a map by using a compass rose. The compass rose shows the directions of the map so that map readers can relate those directions to the real world. Sometimes a compass rose will just show North. If you know which way North is, you can figure out East, West, and South.

3. Legend: The principal reference to the map symbols; subordinated to the title and direction. However, this is still a key element for map reading; describing all unknown or unique map symbols used.

The legend serves as the decoder for the symbology in the data frame. Therefore, it is also commonly known as the key. Descriptions detailing any color schemata, symbology or categorization is explained here. Without the legend, the color scheme on the map would make no sense to the viewer. The legend tells the viewer that the lighter the color, the longer the last recorded date has been.

4. North Arrows: North arrows indicate the orientation of the map and maintain a connection to the data frame. When that data frame is rotated, the north arrow element rotates with it. North arrow properties include its style, size, color, and angle. The size of the north arrow is in points. Decimal fractions can be entered here.

5. Distance(Scale): Distance or scale must always be indicated or implied unless the audience is so familiar with the map area or distance of such little relative importance that it can be assumed by the audience.

Distance and scale can be indicated in a variety of ways on a map in verbal, numeric, or graphic form. In using computer systems, the graphic form of representing scale is often preferred. With computers, maps are often drafted at different scales than they are printed. In using verbal or numeric scales, the cartographer must be certain that the map is printed at precisely the scale indicated. If a graphic scale is inserted in a digital map, it will always maintain its relative size with respect to the digital map no matter how it is printed. Since scale varies significantly across the area of some maps, one should be sure to note the adjustments required.

6. Labels: Labels are the words that identify a location. They show places (streets, rivers, and establishments) with specific names and can also be used to represent something if there is only one of it, instead of making up a symbol to just represent one thing.

7. Grid and Index: Not all maps use a grid and index, but it really helps in finding locations. A grid and index are common in an atlas and on roadmaps. A grid represents a series of horizontal and vertical lines running across the map whereas index helps the map reader find a particular location by following the numbers and letters in the grid.

The index is mainly in alphabetical order that makes it easy to look up to the name of the place. There are coordinates (A2, B3, etc) next to the location on the map.

8. Citation: The citation portion of a map constitutes the metadata (description) of the map. This is the area where explanatory data about the data sources and currency, projection information and any caveats are placed. Citations help the viewer determine the use of the map for their own purpose.