Geology of Canada spans four billion years of Earth history. Traces of the oldest rocks of the region are preserved in the stable Archean crustal blocks which include the Superior, Slave, Hearne and North Atlantic cratons. These blocks also form the repository of much of Canada’s gold, copper, iron, zinc and diamonds. 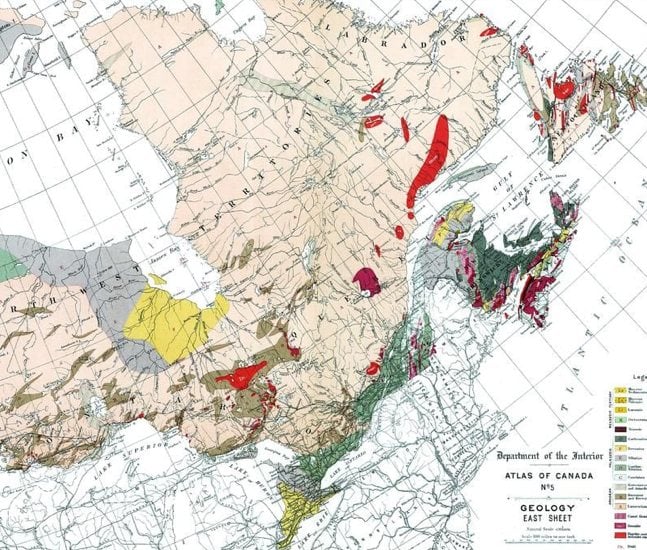 Canada’s geological history further divides the country into six regions, each of which is characterized by a distinctive landscape: the Canadian Shield, Interior Platform, Appalachian Orogen, Innuitian Orogen, Cordillera and Western Canada Sedimentary Basin, and the Eastern Continental Margin.

Natural Resources in Canada significantly contribute to Canada’s total wealth and accelerate growth. A wide range of raw materials creates distinct types of wealth for the economy such as a variety of materials such as iron, copper and zinc. Natural resources in the region are categorised into three types, namely: energy, mineral, and timber resources.

Canada’s deforestation is counted as the lowest in the world. The country is a world leader in sustainable forest management and has healthy, productive and thriving forests. The sparsely populated country has the majority of its land area being dominated by forest and tundra. Since the end of the last glacial period, Canada has consisted of eight distinct forest regions, including extensive boreal forest on the Canadian Shield.

There is a rich distribution of Mineral Resources in Canada. The country covers nearly 10 million km2 and has six main geological regions, each with its own characteristic features and resources. Five of these regions with their mineral resources are the Canadian Shield, Interior Platform, Canadian Cordillera, Appalachian Orogen, and Innuitian Orogen.

Mining has played a crucial role in the history of Canada’s settlement and development of its industrial head. It is one of Canada’s primary industries and involves the extraction, refining, and/or processing of economically valuable rocks and minerals. It is the leading producer of potassium and ranks in the top five global producers of aluminium, cobalt, tungsten, and sulphur. Important Canadian mineral products include precious metals (gold, silver, platinum) and diamonds; base metals (iron, copper, lead, zinc, nickel); energy minerals such as coal and uranium; and industrial minerals (limestone, rock salt, potash, gypsum).

Coal Mines in Canada are spread all over the country and each province has some portion of the country’s vast coal deposits. Of the 24 permitted coal mines throughout Canada, only 19 are currently in operation. Country’s majority of coal deposits can be found in British Columbia, Alberta, Saskatchewan and Nova Scotia.

Canada is considered one of the largest agricultural producers and exporters in the world. The GDP devoted to agriculture dropped dramatically over the 20th century but remained an important element of the Canadian economy. Canada has a long-running agriculture and agri-food industry with long-standing success in the global marketplace. Best industrial practices and renowned reputation for innovative products have consistently positioned it as a cornerstone of the country’s economy and a driving force in international trade.